Did he get what he deserved… 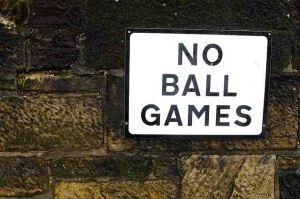 One of the reasons Football is the people’s game and has travelled around the world so successfully is that it’s so accessible and easy to play. You only need a ball. It doesn’t even have to be a football, just anything round that you can kick, be it rolled up socks, tin can or a stress ball.

END_OF_DOCUMENT_TOKEN_TO_BE_REPLACED

What are the press doing to help?

2012 has been one of the more dramatic years in English football and not necessarily due to goals, results and tactics on the pitch. With fans slapping players, sick taunts of death wishes and disrespect for the deceased and the FA coming under more criticism than ever about their handling of situations, the game in its home country has taken a backwards step. But who’s to blame and how do we progress? Do things need to get worse before they get better? And what does the press have to do to help things along, or do they just need to sell papers?

END_OF_DOCUMENT_TOKEN_TO_BE_REPLACED

England Squad – Have your say

Start Of A Tradition

For the above born and bred breed to happen, it’s got to start somewhere. I’ve never experienced the process of selecting a football team to start supporting but I’ve got my own ideas/ morals of doing so. Firstly- in the event of having no family ties to a town/ club, it should be local to you. Secondly, you’ve got to decide the commitment you’re willing to give and the budget you want to have for your new found love. These are not necessarily connected however, as someone not willing to commit a high budget may be more committed to their team than anyone, choosing the local non-league team. Whereas someone may want to follow their nearest Premiership team at 10 times the cost but only go to a few games (also see Pic ‘n’ Mixer & second half of Starting in Adulthood). The latter shouldn’t be seen as glory hunters as the decision may have come down to social factors such as being able to follow within the media and talk about the team on twitter/ blog sites, which obviously will be much easier to do with Prem teams than lower league clubs.

Either way they will be loyal to their team as much as anyone and pass this down their lineage.

END_OF_DOCUMENT_TOKEN_TO_BE_REPLACED

Over Land And Sea – Chelsea vs Nordsjælland (PICTURES)

Who’s going to win the Premier League this season…DISCUSS

I would just like to touch on a fantastic gesture from Everton. The club kindly invited the family of the late and great Alan Ball who represented both clubs during his playing career along to mark the occasion and be welcomed on to the pitch at half time. He was my Fathers idol and one of a kind.